"God will not be recognized as a person, but God will be recognized as a primal truth and energy. The worship will change from a personified God to a more subtle truth, energy. It will not be a solar energy or a lunar energy; it will be the creative energy which is known as cosmos."
Harbhajan Singh Khalsa (Yogi Bhajan) (1929-2004)

At the Solstice today, we begin a new energetic cycle; perhaps an uncharted direction in the coming three years. The cosmic wheel moves another notch ushering a new vibration into the expanding consciousness of humanity. Old traditional ways are disappearing; some gently, others not so gently. Yet disappear they must to make way for the new. Such is the power of these highly changeable times. The turning of the wheel.

The first two decades of the 21st Century have been nothing short of transitional. Upheavals of traditions and structures, massive shifts and upgrades of technology, greater individual awareness of group consciousness, higher and expansive levels of collaboration, and a heightened sensitivity about the human role in this mystical elemental world represent strong telltale signs of bigger changes ahead in this decade.

Since 2000, there has been an approximate net increase in the world population of 1.7 billion. That's 1,700,000,000 in just 20 years. Early in 2021, the population will exceed 8 Billion. By contrast, just 200 years ago, the world population was estimated at 1 Billion (far less than added in the past 20 years!). This exponential growth continues to quicken adding unprecedented stress to the planet's eco-systems and the quality of life.

And with a rapidly increasing population a much greater awareness has emerged of our home planet and the Cosmos at large through developing technologies. Satellite and International Space Station observations and measurements provide us daily with a plethora of scientific information about the Earth, its weather and its geological changes.

From this expanding awareness we have come to realize this planet has an enormous ability to effect massive, rapid shifts in the energetic field in which we live (viruses, earth changes etc). And very importantly, the very warning bells of building environmental stress, which were sounded back in the 1960's, now rapidly capture the attention and inspire action from a far greater number of people.

Last week I wrote about the recent eclipsed New Moon and today's Solstice. If you haven't done so, I suggest you read (or listen) to that account before going further here.

At this Solstice moment and over the next few days (just after noon in South Africa; midnight in Hawaii; 5:02 am on the East Coast US; 7:02 pm in Japan, and 10:02 UT) we now pause and reflect on the coming season - winter for the north; summer for the southern hemisphere.

So much opportunity now exists in the energetic field of possibilities due to massive changes (mostly unexpected) over the course of this past year. The bigger question: how will we use such change to effect a more positive, engaging, inter-connected and collective connection in the coming days?

Many people today will join in global meditation events, which I consider wonderful. Always a good thing when people come together to participate in something of an uplifting experience. By contrast, some tout such meditation events will help raise the vibration of the Planet. This is a good place for 🤦🏻‍♂️🤦🏻‍♂️(double head slap). It seems to me a bit arrogant to think the human species has ever possessed the ability or capacity to raise the vibration of a planet over 4.5 Billion years old. Personally, I think Gaia knows exactly how to shift its vibration, something it has done over 6 major extinction events. If anything, such heightened human attention would be much better spent attuning to the frequency of the Earth; simply listening/sensing rather concerning ourselves with how the Earth vibrates.

The Solstice chart for the coming season, as described in my previous blog, ushers in a new wave. Expansive Jupiter and structured Saturn coming together at the 0° point of Aquarius (closest they have been visibly seen in over 800 years) is telling, pointing to the potential for a much greater Aquarian existence over the next 20 years or so. And of course, Uranus, Aquarius' modern ruler, now transiting through Earth sign Taurus, will create strong squares with Jupiter and Saturn over the coming months to help reorganize/realign/further attune our own physical human vibration to the Earth's frequency. 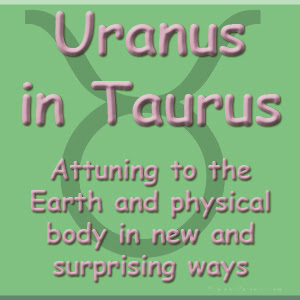 In that spirit, and despite everything we think we know about humanity and its evolution, the Earth and its natural energetic field, the Solar System inter-relationships, and the Cosmos at large, the grand design of the Universe will readily show us how much we don't know in the coming days. That's how we grow. That's the essence of Uranus' transit in Taurus as we attune in new ways to the Earth's vibration and our own physical bodies.

On a personal level, becoming an empty vessel would be a good start. Seems the Earth has a lot to teach us if we pay attention and listen to its messages expressed through the land and its animal denizens.

Uranus' recent epic transit through Aries between 2010 and early 2019 with its 5 direct squares to Pluto in Capricorn was the catalytic seeding point for everything Uranian that follows in Taurus (now), Gemini (2025), Cancer (2032) etc. Remember, Uranus brings lightning quick changes in wholly unexpected (out of the blue) ways. For example, on the very day (March 11, 2011) Uranus reentered Aries after a quick revisit to Pisces, a massive 9+ earthquake and resultant tsunami struck Japan affecting the entire Pacific Rim. Talk about a sounding "pay attention" bell!

And even more pertinent to this now moment, earlier today, just before the actual Solstice moment, Kilauea Crater on the Big Island of Hawaii (site of massive eruptions in 2018) reawakened from its long slumber. That's another Uranian-Taurus moment; a sounding bell!

With all that said, "expect nothing, be prepared for anything" as we move through the coming months. Uranus in Taurus encourages us to realign with the Earth's and our very own physical body's vibration, more so from an Aquarian viewpoint. That progressive wave literally means cleansing, strengthening and upgrading our physical body's core in collaboration with others. More recent versions of energetic body modalities align more with group approaches (Aquarius) rather than singular private ones. And in that vein, such expanded field of collective energy exhibits much more powerful entraining responses and shifts. That process will continue to further evolve and expand during Uranus' Taurus transit through 2025.

Suggested focus for the Solstice vibration:

1. Witness the pairing of Jupiter/Saturn in the western sky 30 minutes or so after sunset. As the days unfold, this pairing will grow apart and by January be lost in the glare of the Sun. "As above, so below", deeply breathe in the photons of light emanating from this pair into your body's core. Receive its messages.

2. Receive bodywork (energy attunement, craniosacral, chiropractic (I suggest Network Spinal), acupuncture, massage, group yoga etc. especially in this pandemic time. If you haven't done so, make this part of your routine. This is a much more energized, energy rich way to strengthen your body against virus spread than any man-made medical approach such as vaccines. Think progressively!

3. Follow an Earth-centric ritual to honor the seasonal change. Create a progressive intention for how you want to participate with others in the coming days.

4. For those in more temperate climes, plant a tree, shrub etc. as your contribution to the natural world. 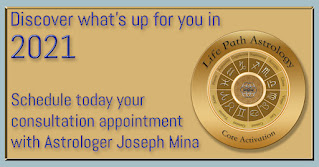 Life Path Astrology Consultations - embracing the new: As 2021 rapidly nears, deepen your understanding of your natal birth chart along with a look ahead to 2021 and how to best navigate the planetary cycles of the new year. I am available for private one-to-one consultation sessions via Skype or Zoom (audio recorded).
Gift certificates for family and friends are available too!
Great changes present life changing opportunities. My personal astrological counseling session helps you create meaningful strategies for adapting and shifting with the current powerful planetary cycles. Schedule TODAY your appointment!]

Conclusion: Although the coming planetary archetypal cycles are intense, I feel excited to witness and actively participate in such enormous planetary change. Although the coming few weeks may prove unsettling as Mars completes its retrograde-square cycle with Pluto in Capricorn (previous blog), related events will highlight what is coming to an end and what is beginning. Bless it all and let it go. This is a time to transcend the rhetoric of fear and embrace a more progressive way for attuning to the Earth, its natural world denizens, and our fellow humans.

One last note: the other day I was sorting through saved files I had on an external computer drive. Together in one folder I found the movies Avatar and The Matrix (part 1). Each very similar to the other: about transcending the apparent to immerse into the real. Given what I have witnessed over the past 9 months, their reappearance to my awareness is so timely; their messages more pertinent than ever. Glad I can share such with a much wider audience.

I welcome your comments and feedback. I also moderate the comments to ensure only comments germane to the article are included. Mahalo, Joseph

Starman Update: "Empowering Lives Through the Mystery of the Sky". I bring you the latest in astrological news. Discover new ways to consciously create your world with the power of the planetary patterns for the "Inner & Outer Journey".

My Soul Style: "I am a playful, wizardly agent of change, courageously interweaving my creative expressions into the fabric and soul of humanity...for our transformation and awakening."
Joseph Mina is an Astrologer, Teacher, Healer & Photographer in South Africa and beyond. As a Master of his crafts, he has been sharing Quantum Alignment Bodywork for over 27 years and Astrology for 20 years, creating integration between a person's soul purpose and their evolutionary life path.
More information on my web site here

Translate to your language